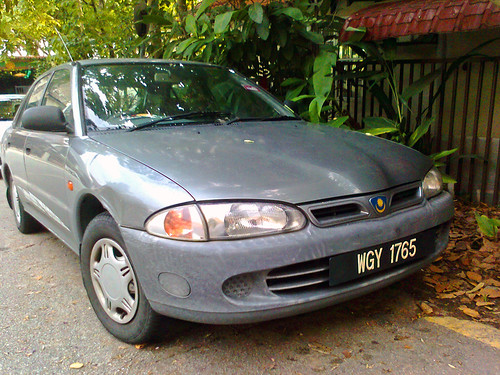 Image by Aero7MY
I’ve shared several photos of my car now, so here’s a couple of photos of my dad’s old car, his third to be exact. It’s a 1999 Proton Wira Aeroback 1.5. I was only 5-years-old when my dad bought the Wira in February 1999, I can barely recall any memories from those early days… but the following years held some of my most fond and also some of my most sour childhood memories. I’ll start by saying that no other car has come closer to my heart since. All of the ups and downs for the 12 years or so we’ve had the Wira, it all made up for a very memorable experience.

I never really drove the Wira, but I’m pretty sure I started it once… in a petrol station if I’m not mistaken. I can only share comments from a kid’s perspective, but with some mature reasoning, so please do forgive me for the following comments, most of which are somewhat shallow and ambiguous. By the time I was old enough to comprehend the automobile in more technical terms, the Wira was no longer in the family.

From what little I can recall in the early years, one such moment has stood out more prominently from the rest; that moment in the late evening when you hear that memorable horn from your dad’s car. Ohhh man, I swear, that is the best sound ever if you’re a little kid. ”Ma, dad’s here !” or ”I’m coming (to open to gate) !” … I’d run all the way down to open the (manually operated) front gate for my dad. I don’t know why, but it was always oddly satisfying as a kid. Of course, I was always happy to see my dad every evening after work, but I was equally happy to see the Wira too. To me, the Wira was an extension of my dad, they were inseparable. As I grew older, I became less and less inclined to open the front gate whenever my dad came back, passing the responsibility on to my mom and younger sister. Maybe it was the PlayStation, maybe it was the internet, or maybe (and most likely) it was just part of growing up. These days, we’ve an electric auto-gate, which means we don’t need to run all the way down to the front gate anymore… but I feel as though we’ve lost ‘something’ despite the added convenience.

The Wira took me to school in the early days, and when class ended for day, I would eagerly wait for my dad and his Wira. Most of the time, he wouldn’t even need to honk, because I’d spot the Wira from a hundred or so feet away and be standing in wait. Despite the widespread popularity of the Wira, I strongly feel that the specific trim variant we’ve purchased is rather rare. It’s the 1.5-litre variant (which is one up from the base 1.3-litre), but in bog-standard guise. The front and rear bumpers are just hard plastic (yep, unpainted plastic !), there were no rear parking sensors (my dad never trusted sensors anyway !), good ‘ol steel wheels with hubcaps (amazingly, those hubcaps were very durable !), a regular interior (which had a rather awful looking light green tinge to it), and a 5-speed manual transmission (my dad prefers manuals, but he was forced to buy an automatic when he bought his fourth car because it wasn’t offered with a manual !). Airbags and ABS were out of the question. The 1.5-litre engine, previously used in the 80s Proton Saga, is fitted with a carburettor… which meant poor fuel efficiency, but fortunately, being a manual, fuel consumption figures could be held at an acceptable level.

The Wira had been in at least four accidents over our 12 years of ownership, possibly several more. Once a car rear-ended us at a large intersection, I remember that one quite clearly as I was in the car. In another accident, the Wira was sandwiched between two cars near a toll gate, I was there too. Then there was the incident where my sister accidentally opened the rear-right passenger door while stationary in front of a traffic light, which clipped a moving motorcyclist, I witnessed this one as well. The worst one however, was when a tree (!) fell on the poor Wira on one stormy day… I never got to see the extent of the damage, but if it’s any indication, my dad had to car pool with his colleagues for some time while he waited for the car to be repaired.

Even when we bought the new Proton Saga in 2007, I always felt that the Wira was the superior car. It was more powerful, more spacious and somewhat more upmarket (for its time). The Saga felt better at first, but after some time, I began to feel that it was just a brand new, old car.

We made frequent road trips in the Wira. We often travelled from our home in Petaling Jaya to the small city of Ipoh to the north, a journey of about 200km (or 400km to and fro). The Wira was a decent highway cruiser… but only when the air-conditioning worked. Speaking about the AC… I must make mention that this little write-up will be incomplete without some elaboration on our Wira’s reliability. Well, in general, it was not a good experience… at least, based on what I could recall as a kid. The air-conditioning failed frequently and often unpredictably. The power windows have been replaced sooo many times… it came to a point where my dad just gave up and thought it wasn’t worth wasting money and time on frequent visits to the workshops. Then there’s the interior… the switchgear lost what little tactile feel they had over time (they became less smooth to the touch / operation). Some parts even broke, several times at that. There was always this fear whenever I operated the switchgear; I really didn’t want to break any of the buttons. The central locking was more of an inconvenience because it would only lock / unlock a few doors, and not all of them. The radio failed early on… not just in the literal sense, but also failed in the sense that it was fitted with a cassette player (in 1999) ! Nonetheless, the Wira was mechanically reliable… for the most part. Apart from the rusting radiator and some other small bits, the car never let us down until the late 2000s when more serious problems started to surface.

One of my most frequent questions to my dad would be ”Pa, when are you going to buy a new car ?”; I think that sums up what I thought of the Wira as a kid. However, by the time I grew older and started college, when my dad bought his fourth car, a 2011 Toyota Corolla Altis 1.8E in mid-2011, I realized that the Wira was much more than a car, it was my childhood, it’s the reason why I’m still here typing this little write-up. There was this one instance where I had a serious, potentially life threatening Asthma attack (in 2006, if I’m not mistaken) and if it weren’t for the Wira and my dad’s driving skills, I wouldn’t have made it to the clinic in time. The Wira was there for me the whole time, but it took me over 10 years to truly realize that… and to appreciate and value her loyal service to my family.

In 2012, my dad sold the Wira to my cousin brother because we didn’t have enough parking space for 4 family cars. Unfortunately, my cousin brother had butchered the Wira with tasteless modifications, where the Wira was previously in largely stock condition. Plus, he just didn’t give a damn about the car, as evident by the amount of exterior damage it sustained in just 2 years of his ownership. I don’t even want to think about what the interior looks like. The large dent on the rear tailgate, below the spoiler (visible in the above photo) was not there when my dad owned the Wira. Worst of all, sometime in 2014, the Wira was stolen (!) at night. The police later recovered it, abandoned with a large parking fine no less in late 2014. The police requested my cousin brother to claim the car as soon as possible, but it’s been months now and there has been no updates from him… he probably can’t be bothered.

It’s so disheartening to see the Wira treated this way after all it has done for my family in the 12 years we’ve had it. It makes me mad even. I have contemplated buying it back from my cousin brother, but at his stage, it’s much too late, the car is in a terrible state, the cost of repairs alone would massively outweigh the cost of purchase. Ahh well. At least I have these two priceless photos of the good ‘ol Wira. I’ll try to dig up some more if possible.

This isn’t one of my usual write-ups, it’s a love letter to a car which has shaped my life into what it is today. Despite the bumpy ride, I love my Proton Wira… I love her very, very much. :]

TECH TALK: Turbo-Compounding Is it “the next Big Thing” in energy recovery?
We pull down any one of the standard internal combustion engine texts and see that the chemical energy of the fuel goes into three big channels: power to the crankshaft, heat rejection to coolant, and exhaust energy. Turbochargers recover some of the …
Read more on Cycleworld

Everyone Could Be Driving EVs In 10-15 Years
The signs that we see at the Tesla superchargers – waiting lines – are indications of what we will see in the coming year at Fastned as well. We have to work hard on … With used 3 year Nissan Leaf's selling at below $ 10,000 dollars and the range of …
Read more on CleanTechnica

Patni: Today's sharing economy will shape our future
Lyft and Uber, every NU student's best friends, are ride-sharing companies where regular people provide rides on demand in their personal cars. The greatest aspect of the … We are simultaneously changing the way we spend money while redefining the …
Read more on Daily Northwestern